Here we are already, week 2 of my December giveaways! This week, a copy of Diffraction is up for grabs, so make sure to get your entries in. One lucky person has already been notified that they won a copy of Quantum, the next winner could be you! See below for details on how to enter. And don't forget Atrophy is 99c all month long so get a head start on the series with a super deal! 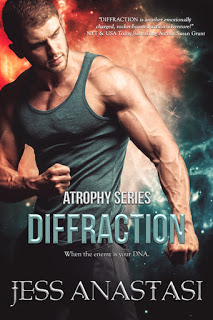 Winner of a 2017 Galaxy Award for Science Fiction Romance!

After his unusual reaction to a weapon, Commando Varean Donnelly is accused of being a shape-shifting alien and imprisoned onboard the Imojenna. Sure, he has abilities he keeps hidden from everyone--including the gorgeous doc examining him--because the government makes sure people as different as him disappear. For good.

Imojenna doctor Kira Sasaki knows there's something different about the handsome commando the captain's thrown in their brig. She doesn't think he's Reidar, although he might have been a victim of their cruel experiments. But when Kira learns the stubborn commando's racial make-up, she finds herself torn between defending him to Captain Rian Sherron and his crew or urging Varean to escape while he still can.
at December 09, 2018

I'm someone who has lived a life seemingly in the background, I must say this final indignity I have suffered almost too much to endure. You see, I have been sickly and weak since the day I was born and doomed to go through all my life a weakling. I seemed to have always suffered from one illness or another and could never play with the other children as I so desperately wanted to. Mother always made such a big fuss over me, also, making the situation worse as the other boys teased me mercilessly after they saw it. I was browsing  the internet searching on how i could be transformed into a powerful when i came across the email of a man named Lord Mark. who was a VAMPIRE so I told him that I has always dreamed of becoming a  VAMPIRES, All i did was just to follow the procedure that i was been told, and i bet you that procedure I took change my entire life to something i ever desire, freedom, sickness free, pains free, fame, influence, connections and even more that i can. Thanks to Lord Mark. Do you want a life full of interesting things? Do you want to have power and influence over others? To be charming and desirable? To have wealth, health, and longevity? contact the vampires creed today via email: Vampirelord7878@gmail.com