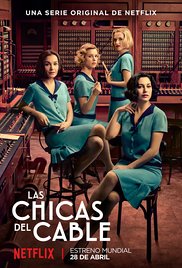 Actually, I finished it a bit over a week ago, but hadn't gotten around to writing this post.
I'd been waiting for this show to appear on my Netflix catalogue since I finished watching Gran Hotel last October and some internet stalking research revealed that many of the same people behind Gran Hotel were now working on a Netflix original called Las Chicas Del Cable, including the lead actor, Yon Gonzalez.
Season 1 part 2 released last week (or was it the week before?) with little fanfare, but man, was I excited when I saw it there. However I made myself wait, as there were other shows I was watching and was guessing that once I started Cable Girls, if it was anything like Gran Hotel, I wouldn't want to watch anything else until I'd binged all the episodes.
And I was right.
So right. 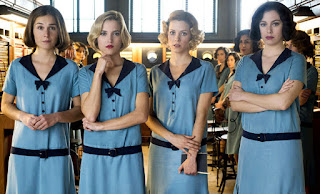 Cable Girls is set in early 1920s Madrid, based on a group of four women who struggle for their jobs and independent lifestyle as operators at a telephone company, against the social norms of the time. Like Gran Hotel, this show is in Spanish, so be prepared to read subtitles. And as happened with Gran Hotel, I'd gleaned enough Spanish to understand that what was being said wasn't always exactly the same as what was translated on the subtitles. Though, I did see it mentioned somewhere that English dub was available, but I didn't look into it, because I actually enjoy listening to the Spanish being spoken.
I'm not sure what I expected of this show -- not for it to necessarily be Gran Hotel all over again (because let's face it, nothing is ever going to be Gran Hotel again!) but the first half of season 1 managed to surprise me in a lot of different ways, all good. 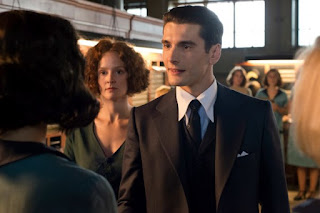 To begin with, Yon Gonzalez (who played the lead part of the swoon-worthy Julio in Gran Hotel) played a much more polarizing character this time around, named Francisco. There was no good or bad for this character, just a whole lot of gray where what he wanted often ran in opposition to his duty and the life he'd built for himself.
In the first episode, we were introduced to Alba, who starts working at the phone company under the fake name of Lidia, blackmailed into stealing from the company, not knowing her childhood love, Francisco, is the company director. However, Francisco is also BFFs with the company owner's son, Carlos, and married to the company owner's daughter (whose name escapes me right now).
Years earlier, Alba/Lidia and Francisco were split up only moments after arriving in Madrid to start a new life together, due to a misunderstanding which saw Alba/Lidia arrested. Her rescuer ends up being a Madam who runs what basically amounts to a brothel, I think, and she teaches Alba/Lidia how to survive. She spent the next years thinking that Francisco simply abandoned her, while Francisco never knew what happened to Alba/Lidia.
Until she turns up at his company as one of the new operators. Francisco recognizes her right away, but she tries to pretend he has her mixed up with someone else. He isn't fooled, however, and her suddenly reappearing in his life sends him into a bit of a tailspin. 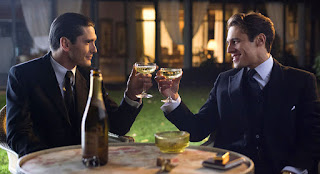 Francisco is in an interesting position. The owner of the phone company trusts him in running things more than he trusts his own son, Carlos. Meanwhile, Francisco is all but a brother to Carlos, so Francisco is constantly trying to manage the father's expectations, his own duty to the company, but also take Carlos' side when he clashes with his father. Of course, you have to throw in a few secrets that Carlos doesn't know about between Francisco and Carlos' father when it comes to running the company. Plus Carlos has a secret of his own. 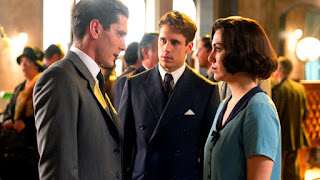 Then the really messy interpersonal stuff comes into it. At first Francisco is determined to win Alba/Lidia back, despite already being married. But then circumstances force him to recognize the damage his actions will have on his home life, possibly extending into his professional life. Most of this is not helped by his scheming secretary, who ends up spying on Francisco on behalf of his wife.
And of course, this show wouldn't be complete without the love triangle. Alba/Lidia also caught Carlos' eye from her first day on the job, and her continuous rebukes to his charm only tempts him more. Finally, circumstance forces Alba/Lidia to get closer to him, and at first she only plans to use him, but of course, feelings get messy, and she becomes torn between Carlos and Francisco. Every time it seems she might be able to move on from Francisco -- which would probably be the healthier thing for both of them -- some other revelation or circumstance pushes them back together.
Part 1 of season 1 ended on a cliff hanger, which I usually hate, but in this case it was all so well done, I couldn't be cranky about it. But I am now impatient to see the second part of season 1, which won't be coming for a few more months at least. 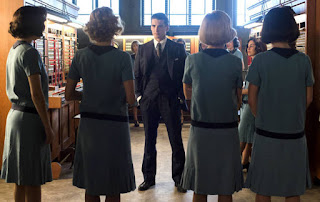 And here I haven't even mentioned all the other breath-stealing things going on with the three other female main characters. Cheating spouses, sexual confusion, secret fiancees, hidden pregnancies, and all kinds of situations that kept me up until the early hours of the morning watching episode after episode.
If you are a fan of Gran Hotel -- heck, even if you're not and just love a good period drama -- then Las Chicas Del Cable is definitely worth your time.
For me, I'll be eagerly waiting for the second half of season 1 to drop, and in the meantime, might even do a Gran Hotel re-watch to tide me over.

I discovered Cable Girls last year and was hooked. Then Grand Hotel was suggested. I hesitated because of the subtitles but OMG I LOVE IT! I carve out time in my day to watch an episode but I have to focus so I can read it but WOW. I'm on the edge of my seat. The writing is so clever! I even love the inspector. Cracks me up.

Have you watched El Internado yet? It has Yon Gonzalez in it as well.

I'm someone who has lived a life seemingly in the background, I must say this final indignity I have suffered almost too much to endure. You see, I have been sickly and weak since the day I was born and doomed to go through all my life a weakling. I seemed to have always suffered from one illness or another and could never play with the other children as I so desperately wanted to. Mother always made such a big fuss over me, also, making the situation worse as the other boys teased me mercilessly after they saw it. I was browsing  the internet searching on how i could be transformed into a powerful when i came across the email of a man named Lord Mark. who was a VAMPIRE so I told him that I has always dreamed of becoming a  VAMPIRES, All i did was just to follow the procedure that i was been told, and i bet you that procedure I took change my entire life to something i ever desire, freedom, sickness free, pains free, fame, influence, connections and even more that i can. Thanks to Lord Mark. Do you want a life full of interesting things? Do you want to have power and influence over others? To be charming and desirable? To have wealth, health, and longevity? contact the vampires creed today via email: Vampirelord7878@gmail.com