Agents of Shied - 4x21 The Ward/Fitz Parallel Set in Stone

I hate to say I told you so... Who am I kidding? I love saying I told you so! Totally called the Ward/Fitz Parallel two episodes ago.
I almost wasn't going to write a post about AOS today, I kept telling myself to wait until after the season finale next week and do a season 4 wrap up. But I couldn't help myself. Because there was one line Fitz said in this week's episode that will go down as one of my favorites of the entire season. 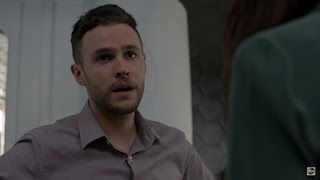 "I'm just like Ward."
Oh man, the feels. The dawning understanding on Fitz's face, in that moment completely understanding original-Ward for the monster he was, now having that same monster inside him, it was brilliantly executed by both the writers and the actor, Iain De Caestecker.
But I'm getting ahead of myself.
In this week's episode, everyone except Mack escaped the Framework. This actually has to be one of the best overall AOS episodes out of all four seasons so far. We had Mae and Coulson locked in a room together with the enemy outside, the two of them trying to figure out how to escape their underwater prison, while hashing out some of what had happened while the Mae-LMD had been in place. Coulson almost admitted to Mae that he'd kissed the Mae-LMD, but couldn't get the words out. Mae filled in the blanks, but assumed that her LMD self had tried to kill Coulson.

He totally jumped on the excuse, and it was one of those laugh-out-loud moments I've missed seeing. Even in a tense situation where death is a real possibility, the AOS writers still manage to get some humor in there, which only gives the whole make-up of the show that much more depth.
Then we had the now human Aida/Ophelia. While Fitz tried to come to terms with what he had done and who he had been in the Framework, he was also dealing with the new Aida/Ophelia. For a moment it looked like he was going to talk her around, that she might actually come good and not be the sociopathic Ophelia/Madam Hydra from the Framework. But then when Fitz admitted that Gemma was the one he'd always love, Aida/Ophelia/Madam Hydra lost her shit and went on a killing rampage.
With multiple inhuman powers, and some other secret that hasn't been revealed yet -- one that Fitz and Mae were in on, something about the inhumans they experimented on in the Framework -- Aida/Ophelia was apparently unstoppable, and escaped what was left of the Shield base, leaving a number of bodies in her wake.
The silent reunion between Gemma and Fitz was gorgeous and heartbreaking. But Fitzsimmons fans better not get their hopes up. I'm guessing there are some rocky times ahead for Gemma and Fitz, especially now that Fitz sees himself in the same light as Grant Ward, who he spent the better part of two years hating. As I said in the last post, I know a lot of Fitz and Fitzsimmons fans are absolutely hating what the writers have done to Fitz, and I'm sorry for them, but I absolutely love it. Take a good character and give him that hint of darkness? Totally sold. I can't wait to see what the AOS writers are going to do with this new dark side of Fitz going into season 5. Will he get the path of redemption that Grant Ward never took? 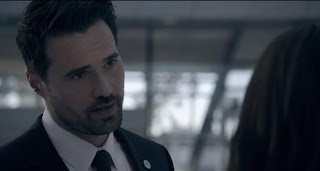 Speaking of Ward, I'm confused and hopeful over Framework Ward. I'm hoping we'll see him in the next episode. I can't imagine that the writers would leave such a massive thread not tied up. There was no real conclusion to his story line when Skye/Daisy left him at the TV station to ensure Coulson's broadcast wasn't interrupted. Given that he was once a pivotal character, I just can't believe the writers wouldn't give fans some conclusion to whether he lived and got his Skye back, or got killed making sure Daisy and the rest of the team made it home.
If we don't see anything of him in the next episode, with Yo-yo in the Framework to bring Mack home, then I'll have one last little slither of hope. And that hope is that after Aida/Ophelia became human, but before the underwater base got torpedoed, Framework-Ward also managed to come through, getting a human body and escaping the flooding facility. Maybe he went up the stairs when Coulson and Mae went up the elevator. Maybe he managed to hide on the submarine. And during the first two or three episodes of season 5, he's going to randomly appear, surprising everyone. 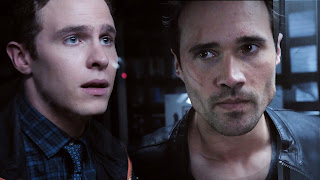 This would be so great to continue the Ward/Fitz parallel. Because now we have this good Ward who was brought into Shield by Victoria Hand, is loyal and an all round good guy, while Fitz has two lives worth of experience affecting him, one of which he was the bad guy who did all the wrong things, just like Original-Ward.
Yes, I am praying hard that the writers have decided to bring Ward back for season 5, and we'll see some semblance of the original team for what could be the final, epic season.
Oh, and I also have to mention, I was happy to see Robbie Reyes, aka Ghost Rider made his way back to our dimension in the last few minutes of this episode. The season four finale is looking like it'll be amazing.
at May 11, 2017