I am VERY excited (like, you can't imagine how excited... bouncing in my chair excited) at being able to share with you the brand spanking new covers for New York Times and USA Today bestselling author, Susan Grant's 2176 Freedom series before they come out on the 15th of November.

Before we get into the juicy details, I just have to say that Susan has long been one of my sci fi romance idols. I read all of her books many years ago, and her 2176 books were always my favorites. So it makes it even more special that I now have the privilege of seeing these books re-worked and re-released on the world. Seriously, if you love sci fi romance and missed these wonderful books when they first came out, or if you've been thinking about trying sci fi romance but don't know where to start, then these are the books for you!

Without any more gushing, I give you...
*trumpets*

A word from Susan:

The 2176 Freedom Series is a 2-part sci-fi action romance series/serial. Originally, the “2176" series consisted of five books written by four different authors following a series bible in a world that I created. The publisher subsequently went out of business and the rights to books 1 and 5 reverted to me. Recently, I took on the huge task of modernizing and rewriting both to stand completely separate from the old series. It was a labor of love that I hope will provide hours of edge-of-the-seat reading pleasure. It also opens up exciting opportunities for more stories in the 2176 Freedom world: Rim Riders, Clones, Warlords, Raft City Pirates, Revolutionaries, and more!

Ahem. Anyhoo, here's all the info you need to go buy these books when they come out:

The Legend of Banzai Maguire 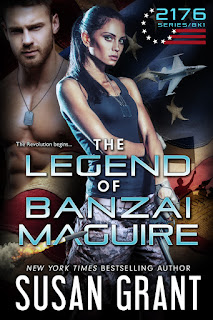 The year: 2016. While flying a peacekeeping mission over North Korea, Air Force pilot Bree "Banzai" Maguire is shot down. Instead of the North Korean troops she expected, she finds herself captured by a mad scientist and put in bio-stasis. When she wakes, everything has changed. It's 2176, the world is in crisis, and she is a hotly contested prize. Once, Banzai's job was to protect democracy; now a mysterious voice claims she must bring it back.

The year: 2176. U.C.E. Commander Ty Armstrong is a decorated SEAL, combat veteran, and part-time treasure hunter. Seeking one elusive prize has become a personal obsession for him: Banzai Maguire, who was never found after her mysterious disappearance 160 years earlier. His quest to find her remains takes him into enemy territory where he discovers that not only is she very much alive, he might have already fallen in love with her. But before he can bring her to safety, they are captured by the charming, yet ruthless, Emperor of Asia. Ty vows to escape with Banzai at his side. But his captor has other plans for him—and for Banzai Maguire. 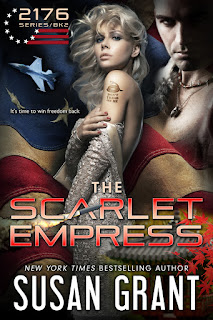 Shot down over North Korea, Air Force fighter pilot Cam “Scarlet" Tucker is imprisoned and put in bio-stasis. She is awakened 160 years later to learn that her wingmate and best friend also survived. Now the “legendary” Banzai Maguire, Bree is being held for treason in the country that was once the United States.

Cam has problems of her own—big problems. She’s in the masterful hands of Prince Kyber, the dictator whom her friend thwarted. He won’t get fooled again. With the mysterious Shadow Voice urging revolution, and her friend in chains, Cam wants the sexy emperor on her side—and maybe a whole lot more. But her role in the thrilling mission to save her country has to come first. Banzai wouldn’t surrender, and Cam won’t either. It’s time to give a royal butt kicking, and Cam knows just where to start.